It is impossible to come to any dinner with my family and not experience some level of craziness. Last night’s Rosh Hashanah was no exception.

I’ve never been shy about sharing the antics that go down when my bloodline is involved and I could easily fill the content of any blog with material from every single interaction. My mother is, without question, the star of these shows, but my aunts – her sisters – are cut from the same cloth so they up the WTF factor to degrees that don’t seem possible.

And last night for Rosh Hashanah, they really brought their A-game.

It started with Yiddish (as it usually does at a Jewish holiday). My mother called someone a “Schmuckalamas” with such conviction you would think it took up space in Merriam Webster’s dictionary. And when we accused her of making it up she literally dared people to look it up. She started asking others if they knew the word (not really asking, rather strongly suggesting they knew it, in that nagging Jewish mother, leading the witness style, “you know the word, Schmuckalamas, right?” Almost making you feel like YOU are a schmuckalamas for questioning it. She was polling the crowd, Siri got involved and then my aunt sealed the deal…

“Of course I know what a schmuckalamas is! My father invented that word.”

Then there was the case of the “Munis”. Here’s the thing about Yiddish, it’s so hard to translate since it’s a lost language. So sometimes it’s hard to explain to someone the true meaning of a Yiddish word if they’e never heard it. When my cousin, Alex, arrived on crutches with a soccer injury and was going over the story of what happened with my mom (even though she has heard and repeated said story a few times since it happened) my mom grabbed her crotch and exclaimed, “You are giving me munis!”

When Alex asked what it meant, my mother casually said, “it’s like saying my crotch is aching for you.”

While maybe that’s literally accurate, it’s not really the best way to describe the sensation and might even get you arrested in some states. For the non-yiddish speakers, you know when you watch someone get injured where they break skin or bone or something and you get that really uncomfortable visceral feeling like you are actually feeling their pain and need to tense up every part of your body, including your nether regions? That’s munis.

It wasn’t all Yiddish. My mom also asked for a drink at some point and said, “you know…that stuff Rachel likes, La Cirque de Solei.” Sometimes it’s easy to decipher what she means and this was not one of those times. What she meant was La Criox and she made no apologies for butchering it and instead looked at us like we were crazy.

I think if we had to pick a highlight though, it would unanimously have been my aunt referencing song lyrics to Blinded by the Light by Manfred Mann. She eagerly said to my mom, “Hey!! Should we ask everyone if they know what a douche is?”. That’s when La Croix shot out of my mother’s nose. If you know her you know it takes A LOT to shock her and this question shocked the shit out of her. My mom was cry-laughing and was asking what the hell she was talking about! My aunt brought up the song and said, “You know…Blinded by the light, Revved up like a douche!”

Enter my husband yelling “It’s deuce….DEUCE!!!!”. That’s when she started cry-laughing too and ran over to my uncle saying, “Bill!! It’s not douche, it’s DEUCE!” He too started laughing and said, “For sixty years I thought it was DOUCHE! Sixty years!”

And that’s how we rang in the Jewish New Year. 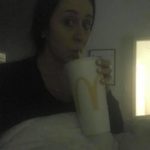 Chivalry Is Not Dead

Cruising With Kids – The Inside Scoop on Carnival Horizon’s Homecoming!