You ever have one of those days? You know…the kind where it doesn’t even seem like real life and if someone were to tell you what was going to go down you would never believe them?

It started like any normal day…as they do at 9-months pregnant, with an internal at my OBGYN (which is SUPER fun) to check for any progress. From there, I had grand plans to go home, get some work done, do laundry and continue nesting.

However, I walked in to see our chihuahua in position to poop right there on my floor. I rushed him outside, with the grace of a hippo, and we made it just in time. Then when I put the little fucker down, he proceeded to puke all over the floor. Guess he traded one bodily function for another.

I texted Jason and he asked me to drop him at the vet. BTdubs, you should also know, that our other dog just came back from the vet yesterday after having ANOTHER surgery from tearing a second ACL in a month. We singlehandedly keep the vet in business and he’ll probably be able to retire 10 years earlier because of us. You’re welcome, doc.

So here I am, already deviating from my plan, and en route to the vet, when it happens. Spike (the chihuahua) pukes all over my seat…right between my legs, which are in a semi-permanent ajar position on account of my protruding belly.

I moved him over to the passenger seat and that’s when he began to shit his brains out…all over my seat…as I’m driving and simultaneously screaming. Because he wasn’t just expelling waste from his body, he was stepping in it, getting it in between every crevis of his tiny paws.

I put him in the backseat just praying for traffic to let up so I could get to the fucking vet and he then performs shitshow part deux ALL over the back seat, and then jumps on the center console and drops more between my seats. I’ve never seen so much poop come out of an 8lb dog.

At this point I am crying and dry-heaving. I pull over into a random office parking lot, call my husband and start speaking in tongues. I was 100% hysterical. Jason is no moron, heard my voice and left work immediately (probably because he was a little scared of my exorcist-level emotion…as he should have been at that moment).

As I waited for him, I tried to clean up with the travel-size packet of baby wipes I had in my car, gagging the whole time, and having cars pull up asking if I was ok. I’m guessing the scene of a very pregnant woman, outside her car, all doors open, with a dog on a leash and handfuls of shit-covered baby wipes, is cause for concern.

When Jason arrived, I passed that dog like a dirty fucking baton and peaced-out to the car wash. Obviously I had to drive with the windows open because of the smell, and as I was on the phone crying to my mother, what happens?? A bird, on a wire above the red light I was waiting at, took my cracked window as an open invitation to ALSO take a shit right on my headrest. I wish I was kidding. When I told my mom what was happening through my ugly crying, she was laughing so hard she could not form a coherent sentence and most definitely peed her pants.

At the carwash, I pulled up and they greeted me with the obligatory, “How’s your day?” They did not get the obligatory, “Great! How about you?” in return. What they did get was a rant about how my car was covered in dog puke and shit (did I mention my seats are perforated?) and I needed them to make it like brand new. They just stared at me…then at my belly…then at me again.

I had texted a couple friends about my current situation and one of them basically saved the day (at least for the 2+ hours my car was being detailed). Shirley came to get me so I wouldn’t have to wait.

Friends pick you up in times of need. Good friends snap a picture of your misery.

My spirits were IMMEDIATELY lifted just being in her presence, because she does shit like put our karaoke song on without missing a beat.

I accompanied her to the mall where she had some business to take care of, and also hoping that the walking would put me into labor. Almost from the moment we got there, I got looks from mall goers ranging from horrified to lascivious. I don’t know why there is a fear of very pregnant women in public, but there is.

In addition to the crowd ogling me like my baby was crowning, we also saw the usual onslaught of Boca’s finest carting their dogs in strollers. But today was different, because there was a woman pushing around a cat. A CAT, you guys. So naturally we had to follow her into the AT&T store for Shirley to covertly get a picture of her, because how do you not?!?

When my husband called to check-in (read: make sure I wasn’t humming and rocking myself in a dark corner), I told him I might not come home and may either check myself into a mental ward or spa… game-time decision.

But instead, after Shirley sniff-inspected my newly washed car like McGruff the Crime Dog, I gave myself a small pat on the back  for supporting a local business…

And said “Boy Bye” to shitmageddon.

Spike is currently on car probation until I emotionally heal.

Yo! Momma: I Want To Do More Around The House 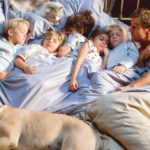