Lies Our Parents Told Us About Sex

Home / motherhood / Lies Our Parents Told Us About Sex

Parenthood is packed with tough conversations. We are responsible for shaping the lives of our kids. We are in charge of laying the foundation for their core values and beliefs. It’s on us to arm them with as much knowledge as possible so that they can make informed decisions. Informed decisions like not ending up on a pole somewhere in lucite platforms and a neon g-string, flinging her hair to Pour Some Sugar on Me while overweight sweaty men having a mid-life crisis, make it rain dirty dollar bills. This is the stuff that keeps me up at night.

I’m in the thick of my own motherhood conversations as my older daughter enters tween territory and we have to cover a lot of ground. Mean girls, why deodorant is a must and not optional, periods, puberty, where babies one from and of course, SEX!

I ‘m not the kind of mother who pulls punches. I tell it like it is all the time. And I truly thought that when the conversations about “becoming a woman” and sex began, I wouldn’t even flinch. I was made for this.

Then it actually happened and I was not mentally prepared. I didn’t expect to feel the way I did. But when I looked into the eyes of my firstborn, I felt like we were waving goodbye to a piece of her naivety and I felt conflicted. I do believe strongly in the importance of educating our kids about their bodies and the responsibilities that come along with that knowledge. It’s a huge moment and thankfully I made it through the first stretch better than I anticipated.

All of it got me thinking…as adults, what do we actually remember about the discussions with our own parents?

I grew up in a very open, liberal house but I really don’t remember specifics about these talks other than my mom taking me to the gyno before I left for college and having her explain that many people look “healthy” from outward appearances, but may actually be walking cesspools of STDs, so not to make any assumptions and do anything stupid.

But I was curious what others remembers, so I asked!

The answers ranged from realistic to ridiculous, proving once again that motherhood is a personal journey and YOURS to do YOUR way.

Here are a few of the highlights.

“My mom is a nurse so it was hard core truth. Saying that, there is a good story from my grandma. Apparently one of her niece’s asked how her pregnant belly got so big. At the time, my grandma was cutting up a watermelon. With a straight face, she looked at her and said ‘I ate a watermelon seed so now my tummy is like a watermelon.'”

“My mom and dad rented a movie from blockbuster when I got my period. They sat me and my sister and brother down on the couch. We watched the video together…it was like “where babies come from”. My siblings taunted me because I was the one who got my period so it was as if this video was just for me. To make matters worse…they also read us a book “where babies come from”. It was so awful. The illustrations were of overweight cartoon characters that were super hairy. I still have flashbacks of how bad it was.”

“Well my Aunt had 3 daughters, then her son. While changing the infant boy’s diaper, one of the toddler females pointed at his genitals and asked, “What’s that?” She replied, ‘That’s his pee pee.’ Then her daughter directly pointed at his testicles and asked again, ‘What’s that?’ and my Aunt replied, ‘That’s where he stores the pee before he goes potty.’ I still wonder, 30 years later, how long my cousin thought that’s the purpose of testicles.”

“I got all my knowledge on where babies come from at Epcot. They used to have a movie “the story of life” or something in one of the pavilions in Future World.”

“My mom said, “there are other things you can do to each other besides just sex. Like oral sex, but Jewish women aren’t too into that. So…you’ll figure it out.”

“Dad planted a seed in the backyard and a baby got into moms belly.”

“My parents told me that they bought me at Saks”

” Nothing. They literally told me nothing. I learned everything from friends.”

“Nothing my parent’s told me, but I was convinced that when I was ready to have a baby, men would be able to do it by then.”

“My mom tried to tell me that you could have a baby by kissing and being even remotely naked with a boy. When I was 16. And already knew better.
She also told me (not sex related) that I could catch nasty diseases from toilets at the public school I transferred to, so my first day in 4th grade I held my pee ALL. DAY. LONG. I’m surprised my bladder didn’t explode.
No wonder I’m a hot mess.”

The point here is that motherhood can be downright daunting. And so can these conversations. However, they are so necessary. So do it! But do it your way. There’s not ONE way. No silver bullet.. Just do it before they get completely incorrect information from their friends or think you bought them at a high-end department store. 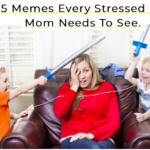 25 Memes Every Stressed Out Mom Needs To See – Whine and Cheez-its FEATURED on Someecards! 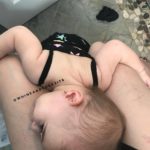 Will I Ever Pee Alone?