Our Kids Are Stronger Than Us

Home / motherhood / Our Kids Are Stronger Than Us

That’s what my toddler needed in her head last night after jumping onto a raft in the pool we finished less than a week ago. She’s a little daredevil who’s done it since we were able to get in a few days ago but yesterday, jumped a little too close and hit her head on the ledge.

I saw the small gash and the blood and I wanted to pass out. But I held it together, called the pediatrician to ask if I should come to her or straight to the ER. She wanted to see it and when she told me she needed staples, that’s when I lost it. She hugged me and assured me it sounded much scarier than it was.

In the ER lobby, she was not even phased. I let her binge every flavor of m&ms from the vending machine for dinner because they’re her favorite. They had to put her little arms in a pillow case behind her back and roll her in a blanket like a burrito so she’d be still. She still didn’t flinch. I laid nose-to-nose staring into her eyes telling her it was ok as they cleaned & numbed the area and put in the staples.

This kid is a rock. More of a badass than I will ever be. She barely cried but I was a heaping mess riddled with mom guilt and nausea over watching my baby get staples put in her head, but also incredibly grateful it wasn’t worse. I let her sleep in our bed, but if I’m being honest it was mostly for me. I let her babble more than 2 hrs past her bedtime and couldn’t stop hugging, kissing and staring at her.

Yesterday my almost 2 1/2 year old proved she’s stronger than I will ever be. Our kids are so much more resilient than us. 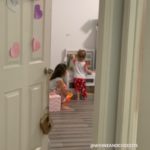 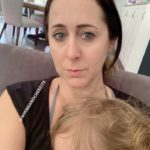 When Toddler’s Break You