Can We Please Talk About Bar Mitzvahs?

Specifically how the kids dress for them.

I’m no stranger to the bar/bat mitzvah circuit. Being Jewish and having grown up in an area with a significant Jewish community, I have attended a lot. Like A LOT.

I once counted how many (because yes, I had a scrapbook where I saved all of the invitations) and I had somewhere in the neighborhood of 80. Every weekend I attended one, sometimes two.

And now, my peer group has kids who are starting to have them. To say they are different from the ones I attended is a gross understatement. We played scotch & soda (or coke & pepsi if your parents were prudes and thought that the mere mention of alcohol would taint their angels. BTDubs, many of your angels were making out behind the temple after the candlelighting.) We pilfered embossed napkins and other mitzvah paraphenalia, got our hands on match books or lighters from parents attending  (who probably only even had them so they could spark up a joint in the parking lot) and headed to the bathroom to make memory glasses for the guest of honor.

We did the quintessential tie dance, which is like a public version of spin the bottle sans kissing, and if your parents were cool and allowed it there was some heavy lambada action going on. The candle lighting ceremony was like three hours long, far longer than the actual service, and we all sat on the dance floor pretending to give a shit while random cousins, aunts and uncles came up to light candles following painfully cheesy poems about them. The we would sprint like kenyan marathon runners to get a front row seat when the “friends” candle was read.

While the adults got their food, there was always some combo of chicken fingers, fries, hamburgers, pasta and other kid food. That’s kind of the only part that has remained the same as I have made the transition from child guest to adult guest.

Now, there are DJs with entourages, little lounge areas for the kids, photo booths and WAYYYYY cooler stuff than we ever had. You know what else is cooler? The way the kids dress. Mostly the girls. First of all, they have bodies like supermodels. They have boobs. They wear cute outfits or dresses that I would wear NOW. No shit, I have legit seen girls in Herve Leger bandage dresses. I didn’t get one of those until I saved my shekels and bought it for myself post-divorce when I was the skinniest I’d ever been because I was entering the dating scene and working out like a fiend stressing over the fact that another man was going to see me naked.

Want to see what I wore to mitzvahs? 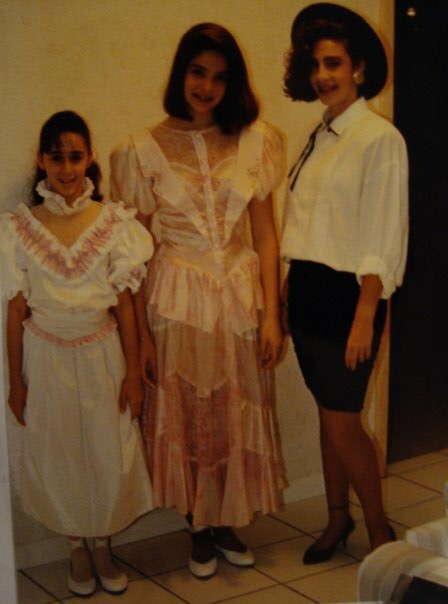 I’m going to give you a minute to process that visual….

I’m all the way in the left. The one who is like three heads shorter than my peers (but the oldest) rocking what almost looks like a wedding gown a really progressive polygamist might wear, complete with sheer panels and a floating collar. And I’m smiling about it which blows my mind.

As I got older, it got a little better, relatively speaking. I traded the floating collar taffeta gem for thigh highs and white patent leather mary janes. Yup, at the age of 18 it was time for my little brother’s bar mitzvah (I did not have one of my own). And I cannot even take credit for this outfit because my mom curated the whole thing from head to toe (she’s not a regular mom, she’s a cool mom).

I don’t know that I could have looked more like an underage stripper with those thigh highs and hoochie hair. But it was also the 90s so c’est la vie.

It was at that same age that I was actually employed as a mitzvah dancer. I gave up good portions of my weekends to help motivate the crowd to dance with a tried and true mix of freestyle moves and choreography packed with egregious over-the-top side claps. I think I made like $150 a party, which at 18-yrs-old seemed like a shitload of money. But when you considered I was working for like a million hours, it was not. That brings me to one other thing that has remained a constant on the mitzvah scene.

That tall drink of hot chocolate is the Puff Daddy of Mitzvahs. And much like Puff, he himself has undergone a major name (and hair) evolution. In this pic, he was just MC Dale. Like MC Lyte but more Jewish. Now he’s Uptown Dale/Dale the Host. Soon he’ll have no name and instead just a really cool symbol, like Prince.

Coincidentally, he was the entertainment at the most recent mitzvah I attended for the daughter of some close friends. And now he travels with an entourage. Unlike Puffy, he still does not have someone to carry his umbrella like Farnsworth Bentley, so if you are looking for work, that position is open. He is cool enough that he travels in a pack, with people wearing shirts emblazoned with his name. #GOALS. I can’t WAIT for the day that I am surrounded by people wearing shirts that scream, ‘RACHEL”.

He still plays the best music (except for a lot of the current stuff I have never heard because I am basically still living in the era of 90s hip hop (I’m not sorry either).

Also, 20+ years of friendship with this man does not come without kismet. For example, we don’t speak every day and I basically see him once-ish a year at his own birthday bash. Yet, we managed to show up to this mitzvah, twinning.

Also, let the record show that the reason I have no other pictures from this day is because I have become that mom at the mitzvah. You know who I’m talking about. The one who didn’t leave the dance floor once lured on by The Wobble because she had to school the 13-year-olds and show them how it’s done. And then when Rob Base came on, forget it. Needless to say, the 13-yr-olds might not have been impressed but my 9-yr-old daughter thought I was the coolest.

I will tell you though that breaking it down after two kids at the age of 40 was like more cardio than 65 spin classes, 85 zumba classes and a dozen full marathons. I am pretty sure my strapless bra was around my waist at one point and I had to ring out my Spanx when I got home.

Needless to say, times have changed, my friends.