Motherhood feels like it steals your identity.
It just does.
Because it’s an all encompassing, full body, mind and spirit endeavor.
It’s a disruptor.
It feels impossible and miraculous.
But what it took me YEARS, through a journey of my first baby, a divorce, a remarriage and another baby to realize, is that it’s not an identity loss. It’s an evolution.
Your world just shifts.
Your priorities change.
You’re pulled in a million directions 24/7 with no end in sight.
It’s exhausting.
It’s hard.
It’s mentally draining.
It’s fulfilling.
It’s emotional.
It’s magical.
I used to feel like I gave up so much to be a mother. But the older I get the more realize I gained so much more than I ever gave up.
I get to love, shape and nurture two incredible little girls.
I gave them life and they in turn gave me life. A crazy, chaotic, never ending rollercoaster of a life filled with dips, turns and twists.
It’s easy to get lost in the folds of motherhood. To feel like you don’t know who you are. Especially in the very beginning when it’s hard to even tread in the waters of post partum emotions, sleep deprivation and giving more than you feel like you have to offer every single day.
And when those waters calm, even just a little, you realize that you are still YOU. Just an updated version. A you 2.0
One with some emotional and physical bumps and bruises (plus floppier boobs and a mom pooch) but also with so much strength and resilience.
That same chick who used to rock a tube top, stilettos and lipstick maybe a couple shades too dark for her complexion while shaking her ass to Biggie in the bar sipping on a stoli raspberry and sprite, is still in there. She is. She just listens to it while rocking leggings, a hoodie and sipping on an iced coffee while her kids destroy the backseat with pop tart crumbs because she couldn’t get it together to make breakfast and get to school on time.
She’s still in there and she’s more awesome than ever because she’s SLAYING motherhood even when she doesn’t feel like it.
Embrace the evolution.
It’s pretty spectacular.
Follow me @whineandcheezits 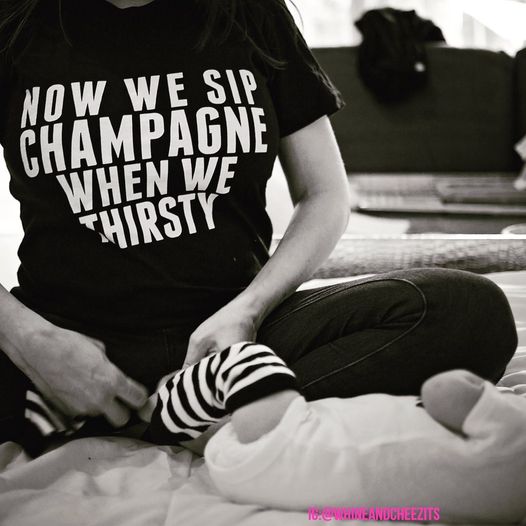