You’ll See When You’re a Mother

“You’ll see one day when you’re a mother.”

It was a regular retort used egregiously when I was growing up. You said it to me when I bitched about anything, celebrated a success, cried about heartbreak and a million other instances.

I heard the words. But until I had children of my own, I didn’t get it. How could I? How could anyone? Although I have always known I hit the motherlode in terms of mothers, I think I still watched you on a daily basis thinking this is what all mothers must do.

All mothers must set up a TV tray in front of their kids’ bed the minute they hear a cough or sneeze and stock it with tea, toast cut into bitesize pieces, the television remote and a bell to summon you.

All mothers must make pit stops at a fast food restaurant on the way to school to drop off the homework you forgot, so that you would be spared from the original and underwhelming bagged lunch sitting in your backpack.

All mothers spend their day tirelessly looking for the newest pair of EG socks (yes, I just dated myself) in the color you’ve been wanting.

All mothers schlep you from dance rehearsal to cheerleading practice to dinner with your gaggle of girlfriends.

All mothers make the biggest deal of every holiday  and infuse little family traditions along the way.

All mothers can’t bear to tell their child that her parakeet froze to death in an unusual Florida cold front and instead just goes to buy an identical one but then can’t decide between two and buys them both, totally raising red flags and inadvertently blowing her own cover.

All mothers hold grudges against the camp counselor who was mean to you when you were eight and even reminds them how mean they were, during a chance run-in 15+ years later.

All mothers spew the phrase “Shake what your mama gave ya!” whether you are heading to the gym, getting ready to perform at a dance recital, going out with your friends or to a job interview.

But…what I learned in my 41 years of life is that all mothers most certainly do not do those things.

As a matter of fact, I am amazed to this day, when I witness other mothers who don’t engage in any of these things and prefer a more hands-off, sit back and watch from afar approach. And now with two little girls of my own, I am always thinking about what you would do in situations I find myself in. I think about how you imparted advice and helped build my character. Because of you, I am feisty and fearless (most of the time) and I want my girls to have that fire. I want them to be leaders instead of sheep and to know that it’s okay to fail. I am all up in their shit in the best way possible, the way you were up in mine. I’m working so hard to empower them and show them their worth and build their confidence and spirit.

I’m also reflecting on the harder times, for you and for me, to take lessons from those moments as well. Your breast cancer, our divorces and other curveballs life threw our way. I want them to inherit the “don’t take shit from anyone” attitude you passed on to me. When my spirit was broken and I was at my lowest, whether during my divorce or my miscarriage, you built me back up. Piece by piece because nobody knows those pieces better.

You not only quite literally created my life, but you made, and continue to make it, the best life possible. I think most women make the obligatory, I’m becoming my mother, jokes…but I channel you on purpose because nobody has been a bigger cheerleader and supporter than you.

I am totally and willingly becoming my mother because I can’t think of a better example. You have shown me that there are times to be soft and times to be a fighter. You are not just the best mother, but an incredible mother-in-law, grandmother, wife, sister and friend.

You are exactly who I want to be, so thank you for setting that mother bar so damn high. I will work every single day to reach it. 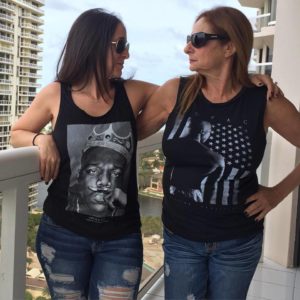